To provide the Maine State Prison with a well-trained ceremonial detail, promoting a positive professional public image at all approved functions, to include rendering honor and performing funeral services as pall bearers or honor guard duties to deceased and honorably retired officers and staff of the Maine State Prison and the Maine Department of Corrections.

The Ceremonial Honor Guard detail is a voluntary unit consisting of 15 uniformed officers ( 2 of which will be assigned as squad leaders) and 1 Commander, who conduct training in precision formations and movements in unison as a unit depicting the esprit de corps of the Maine State Prison while dressed in distinctive uniforms.

Dedicated on July 15, 2009, the “Circle of Honor" Memorial Garden was officially dedicated in the presence of the Maine State Prison and Bolduc Correctional Facility staff. The memorial garden was inspired by resident staff who wanted to memorialize and recognize fellow employees who served the State of Maine, the Department Of Corrections and their fellow employees with honor and died while employed by the department.

Warden Merrill noted that this memorial was for staff by staff, and that this garden was our way of remembering our friends and fellow employees.

Former employees, family members of the deceased, as well as Commissioner Magnusson and Associate Commissioner Doughty attended the event. 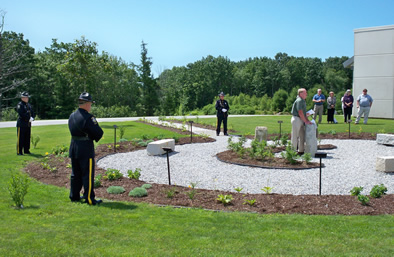