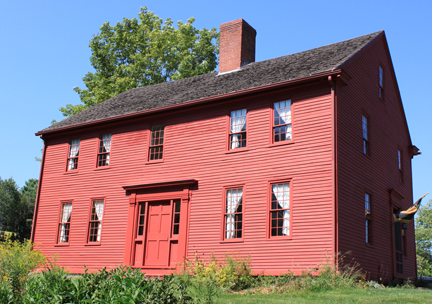 Please check for access and COVID-19 updates by using this link to the Bureau's Safety page.

Off Route 27 on Arnold Road in Pittston on the east bank of the Kennebec River.

Hours / Season The grounds are open 9:00 a.m. to sunset daily. The Colburn House, carriage house, and barn are open by special event only. No events are currently scheduled.

No, George Washington never slept here but he knew the owner. Two other people who figured prominently in the American Revolution did sleep in this house - Benedict Arnold and Aaron Burr. Built in 1765, this colonial Federal-style house was home to several generations of the prominent Colburn family.

In September 1775, Colonel Benedict Arnold led an expedition of more than 1,000 colonial soldiers up the Kennebec River to attack the British stronghold of Quebec City. The men came to the Kennebec from Massachusetts on board eleven ships which disembarked here at the home of Reuben Colburn, a member of the Maine Committee of Safety.

Colburn had help spawn the idea of attacking British Quebec by way of the Maine wilderness and had supplied critical information to General Washington. On Arnold's arrival, Colburn had 200 wooden boats called bateaux waiting and the expedition used them to carry its provisions and military stores upstream toward Canada. This house was Arnold's headquarters and the launching point for his famous expedition against Quebec.

Colburn had also assembled a crew and built the boats within two weeks of General Washington's request to do so, but without enough seasoned lumber for the sizable task, the builders had to use green wood which was more prone to fail in the water. Twenty of these craftsmen, including Colburn himself, then accompanied the expedition to Canada, carrying supplies and repairing the boats as they traveled.

If you are interested in learning about geology around the state, check out the Maine Geological Survey Searchable Database.

Consider lending a hand. Contact us if you would like to help with stewardship or maintenance work.

Get Google map and directions

Located on the east bank of the Kennebec River along Route 27 in Pittston.